The water came almost to the rim of my wellington boots… and that was all it took to make them feel bold.

Under the milky surface, shadows slipped between drifting knots of weed. They ventured close to where I stood, before curling like silk scarves back to deeper water.

The beach dropped sharply into the surf. When the seals popped up, we were but a stones throw apart.

Looking towards Dunbeg from one of the beaches at Caoles.

It was a strange moment.

I was alone: They had come like moths to a flame from half a kilometer of shore and skerry to watch me.

They arranged themselves in a loose semi-circle. I could see a mixture of different ages and sexes.

It felt for all the world like being called before an indigenous community; hovering at the edge of the forest as you pitch up inexpertly in your boat, Tilley hat and cargo pants.

An overture of friendship was required.

In the islands, they say that singing will bring seals closer.

On balance, I decided that my singing voice was more likely to send them porpoising hysterically for the furthest and deepest fathoms of the Atlantic.

I settled instead for a tuneless wailing.

It did the trick.

This individual was especially persistent; following me throughout my survey.

This somewhat awkward angle bestowed each seal with a series of extra chins and a surprised expression.

The purpose of my visit was to walk two lengths of shore looking for dead birds washed up by winter storms. Happily, I only came across one during my entire survey – seabirds have enjoyed this mild winter.

It was a beautiful Hebridean afternoon. The sort that soaks you to the bone under lilac clouds, before soothing you with buttery sunshine and waters so outrageously turquoise they could break your heart.

Though I moved to Tiree alone, I have never wanted for company. Any brief moment of regret or sadness is sloughed away like dead skin by the salty wind.

A soft mood of quiet contemplation is echoed by the soul-cry of curlew and the sweet piping of plovers.

If ever there was a place to seek solace with the wild things, then it is here.

Moving along to the next section of shore, towards Rosgil.

Gunna flashed black, then jade, then black again as showers galloped overhead. A lady with two playful dogs joined me on the beach (my tuneless wailing arrived at an abrupt and bashful halt).

For a while the seal tribe paddled uncertainly from one party to the next.

Something special passes between dogs and seals. The two hail one another, as if in mutual acknowledgement of their long-ago shared genesis.

I was flattered that a splinter group elected to stay with me as I walked; rather than defecting to their canine cousins.

Perhaps they were hoping for an encore.

Turnstones and purple sandpipers worked the strand line in a mixed flock. Oystercatchers (with a single bar-tailed godwit for good measure) snoozed elegantly on one leg. 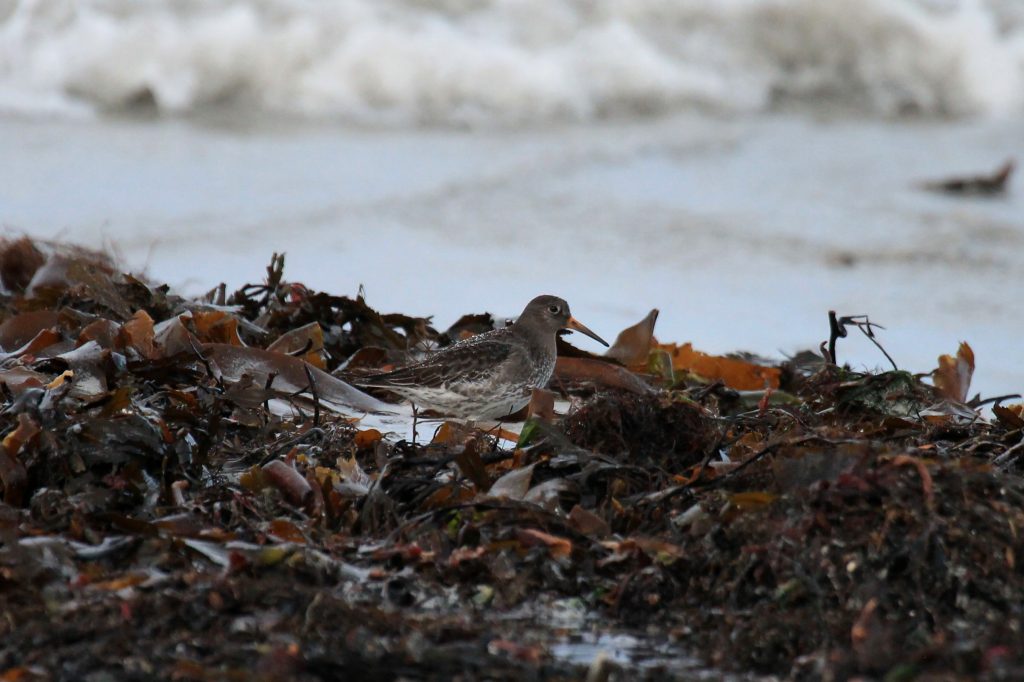 Tiree holds small numbers of wintering Purple sandpiper [pictured] – a bird more readily seen in the East of Scotland or in the Northern Isles. The birds that visit Tiree come from breeding populations in Greenland and on the Canadian Tundra.

Oystercatchers are an excellent example of how stylish attire can never quite conceal poor manners. They might look sophisticated in their crisp black and white livery… but it doesn’t take long for their true colours to shine through as they brawl and squabble furiously over nothing.

The godwit opened an eye just long enough to deliver a disdainful glare – before returning to its slumber.

Behind us the sky darkened over Rosgil.

Herring gulls mewled and swept across the muscling spearhead of weather.

My seal escort slipped away as a billowing curtain of sleet raced east through Gunna Sound.